In the direction of further harmonization with the EU acquis in the field of insurance and the increase in market operations, the Ministry of Finance in cooperation with the Insurance Supervision Agency and the International and Iberoamerican Foundation in the past 21 months worked on a twinning project for which a final event was organized on November 17 2017. The project was implemented by the General Directorate of Insurance and Pension Funds from the Kingdom of Spain. 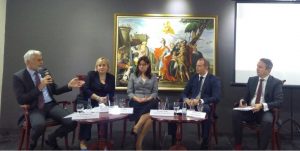 The main objective of the project is the transposition of the Directive on the establishment and conduct of business activities for insurance and reinsurance – Solvency 2 in new legislation and bylaws.

We already know that the Solvency 2 directive brings news and changes simultaneously for the insurance companies, the insurance and the insurance beneficiaries and is the most significant change in the European insurance industry to date. These changes are so extensive that they affect the change of the entire business model of insurance companies, as well as the risk-based supervision model. I sincerely hope that the results of the twinning project will be our quality guide in the reforms that remain in the insurance market, said Klime Poposki, president of the Council of Experts of the Insurance Supervision Agency, at the final event.

Within the framework of the closing event, a round table was held on the topic “Implementation of Solvency 2”, which was moderated by Mr. Klime Poposki, and representatives from the EU also took part

Javier Castillo, General Directorate for Insurance and Pension Funds of the Kingdom of Spain
Peter Pierre Matek, Chairman of the Board of HANFA, Croatia
Gordana Letica, member of the Managing Board of HANFA, Croatia
Nina Kolchakova, General Secretary of the Association of Bulgarian Insurance Companies, Bulgaria, and
Bostjan Vovk, Deputy Director and Head of the Supervision Department of the Insurance Supervision Agency of Slovenia.

Within the panel, participants presented their views on the implementation of the Solvency 2 Directive in their countries. The main conclusions moved in the direction that this process is complex and requires a lot of engagement and resources for both the insurance companies and the supervisory authorities. 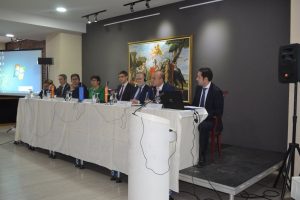 Големина на фонт
Контарст
Accessibility by WAH
We use cookies to ensure that we give you the best experience on our website. If you continue to use this site we will assume that you are happy with it.OkНе се согласувамPrivacy policy